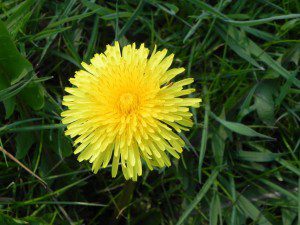 Dandelion is one of the most common weeds.

Dandelions are a pretty flower, and they make good wine, but they don’t belong in a lawn.  They’re a perennial, so if you don’t take care of them, they come up year after year.

Bright yellow flowers form on their stems throughout the growing season.  After a few days, the flowers dry out to a globe of fine filaments attached to seeds that carry easily on the wind.  Children have fun playing with the seed heads and blowing the seeds away, but adults cringe when they think what the seeds may become. 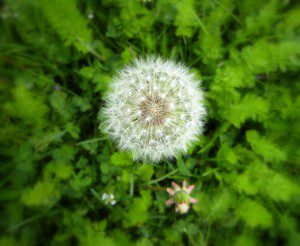 A dandelion that has gone to seed and will spread more weeds.

Pulling up dandelions is generally ineffective.  They have a long thin taproot that needs to be removed completely, otherwise the weed regrows.  Special forked tools are available to pull the whole roots out, along with a bunch of innovative removal tools. Some of these  entrepreneurs have great imaginations…there are dandelion heat zappers and flamethrowers,  along with high-pressure water guns.
There are several herbicides available that are effective on dandelions.  I’m reluctant to use the broadcast type because my yard has a lot of ornamentals which could be hurt by drift.  Instead, I use small amounts of a commercial killer in a spray bottle.  As a bonus, it gives me special satisfaction to shoot each individual one.

Dandelions seeds do best in thin lawns where they can find soil contact and sunlight.  As with most weeds, the best defense is to build a thick healthy lawn so dandelion seeds don’t have a chance to get started.

Most other broadleaf weeds can be controlled by pulling them out by the roots, or with an application of weed killer.  Common New England weeds include clover, plantain, ground ivy, knotweed, and chickweed.

Weed grasses are a bit more difficult as they are less likely to be in isolated instances.  Weed killers won’t work due to their similarity to desirable lawn grasses.  The best treatment for weed grasses is prevention. Avoid cheap seed, study the contents label before purchasing.  Don’t mulch with hay…hay is, after all, mown weeds and it’s full of seed.  And keep your lawn thick and healthy to discourage weeds from gaining a foothold.

If all else fails, there’s one sure method to eliminate weeds.  Glyphosate, aka Roundup, will kill just about any plant that it’s applied to, although it might take several applications.  Apply it carefully to avoid damage by overspray and don’t spill or dribble it on anything that you want to keep alive.  There are some warnings on the bottle, so keep it off your skin too.