This list of individual grass seed types is for your reference.  In most cases, you should be using a blend rather than just a single type. 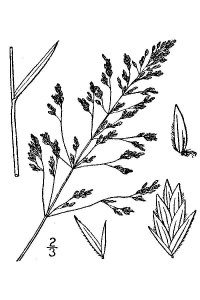 Kentucky Bluegrass is perhaps the nicest of the “fine lawn” grass seed choices. It’s got a fine to medium texture, dark green color, and, despite its Kentucky heritage, it stand up well to Northern winters. Another big plus is that it spreads by rhizomes (underground stems), which means that it actually grows thicker with time and forms a good, solid sod.

Kentucky Bluegrass becomes semi-dormant in hot and dry conditions, but recovers quickly in cooler temperatures with adequate moisture. It grows best grown in well-drained, sunny areas, although a few varieties tolerate some shade. It’s moderately kid-friendly with an average ability to stand up to wear, but also an average propensity for grass stains.

Make sure that you only plant fine textured perennial bluegrass.  Kentucky bluegrass has a nasty cousin called Annual Bluegrass (Poa annua ) that grows like crazy in course textured clumps and then dies out at the end of the season…but not before it’s spread lots and lots of seed. 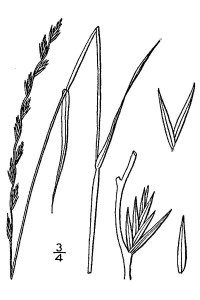 Fine textured Perennial Ryegrass is one of the most common grass seed types added to grass mixtures. It has a fine to medium leaf texture and usually a dark green color. It tolerates wear and heat well but has a tough time with shade, drought, and winter freezes.

Perennial Ryegrass is usually quick to germinate and grow, and there have been several varieties bred recently that come up in just a few days. This fast germination makes it prized for overseeding and quick covers, but also means that it’s sometimes competitive with other grasses. Better mixtures generally contain limited (less than 20%) amounts of Perennial Ryegrass.

Stay away from Annual Ryegrass for your permanent lawn. Annual Ryegrass is a fast growing, course textured grass that fills in quickly. It has some uses a temporary cover or stabilizer for slower growing varieties, but it doesn’t grow evenly or cut well and dies after just one season.

Builders Ryegrass is a mixture of annual and course perennial grasses that sprout and grow quickly, making it a favorite of construction crews who want to spiff up a new home. Unfortunately, the looks fade quickly as the annual grass dies out and the perennial varieties mature into clumps. Whatever survives the first season continues to grow quickly and will need mowing often.

Fine textured Fescues are narrow-leaved and dark green grasses that can be used alone or in a mix of grass seed types with other types. Common types are Creeping Red Fescue, Chewings Fescue, and Hard Fescue.

These are low maintenance grasses and sometimes thrive where other types do not. Fine Fescues tolerate low fertility soil as well as low (acid) pH, and they don’t like a lot of fertilizer. They stand up to drought well but don’t like hot humid weather. Some Fine Fescues contain disease and insect repellent endophytes.

Recently, several new varieties of Tall Fescues have become available. These are finer textured than their predecessors, making them more suitable for lawns. Like their relatives, the Fine Fescues, they have a dark green color and are somewhat tolerant of both drought and heat.

Tall Fescues are somewhat slow to germinate and it might be tough to get seeds started in the Spring or Fall when the ground temperature drops below 70. They will tolerate shade but not as well as a Fine Fescue.

Notice that the illustrations show different growth patterns for each type of grass.  Sub varieties may differ slightly but all types in the same family will usually display similar patterns.  Some grow on a short stem, some on a long stem, and on some all of the blades come direct from the crown.

These varieties of grasses have special uses but don’t get along well in a standard lawn.

Alkaligrass is used along the shore and on roadsides where it’s tolerance for salt and high pH let it grow where other grasses won’t. It has a dark green color with a medium to fine texture. Alkaligrass tolerates mowing.

Bentgrass and Creeping Bentgrass are specially bred to be cut extremely short (½ inch high). They are common on golf greens but become weed-like in a standard lawn cut at regular heights.

Rough Bluegrass, Poa trivialis is a light green colored grass that is sometimes used for it’s spreading habit. It is considered a weed on golf courses and athletic fields because it spreads vigorously by stolons (aboveground stems) but doesn’t stand up to traffic, heat or drought.

Another type of bluegrass, Supina Bluegrass (Poa supina) is somewhat similar to Rough Bluegrass but has better tolerance to wear and is sometimes used on athletic fields. 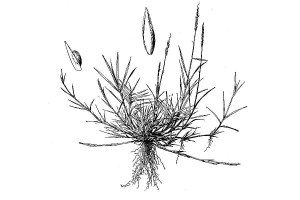 Zoysiagrass has been advertised as the ultimate easy care lawn grass…just plant it and your lawn will look like a country club. In truth, it has some strong points but it’s far from the perfect northern lawn grass.

On the plus side, it grows well during the hot days of summer when other lawn grasses go dormant. Once it’s established, it grows into a thick sod that prevents other weeds and crabgrass from sprouting. Zoysia stands up to wear well and requires less fertilizer and water than most types of grass.

On the negative side, it’s expensive and laborious to start. Zoysia is very difficult to grow from seed and is usually sold as sod or plugs, little pieces of sod that will expand to fill in the surrounding space. This might be why you see full page ads for Zoysia in magazines…it can be a big purchase, and carries enough profit for the growers to justify full page ads.

Zoysia spreads slowly, so plugs might take several years to fill in. Since it spreads by stolons, it’s often a problem keeping Zoysia out of plant beds, and there might be some problems when it invades your neighbors lawn. It’s tough turf requires more frequent mowing than most other lawns during the hot months, but slows down considerably as the weather cools.

While there are some varieties that are winter hardy, it loses its color as soon as the weather turns cold. In my Connecticut home area, a Zoysia lawn will usually turn straw brown in mid-October and look totally dead, staying that way until May. This isn’t a problem for summer homes, but there are some amusing stories about home sellers who have spray painted their Zoysia lawns green so it wouldn’t look like it’s dead.